Soup is an excellent way to use up some of your leftover vegetables and ingredients when you do not want to contribute to any kind of food waste. You can add a lot of ingredients to a potato soup, and everyone’s soup recipe is likely to be different. But what happens when you have leftover soup?

If the soup in question is potato soup, you might want to know if you can freeze it. The short answer is that you can definitely freeze potato soup, just like you can freeze other soups, but it is not always that simple. The reason for this is that a lot of potato soup recipes will include ingredients like cream or milk. This can sometimes be a problem for freezing. But there are some solutions!

This guide will go into some detail about how you can freeze potato soup, including the different kitchen items you will need to make this possible. It will also go into how you can defrost your potato soup once you are ready to serve it again. And lastly, you will find out some of the things that you should consider before freezing your potato soup. 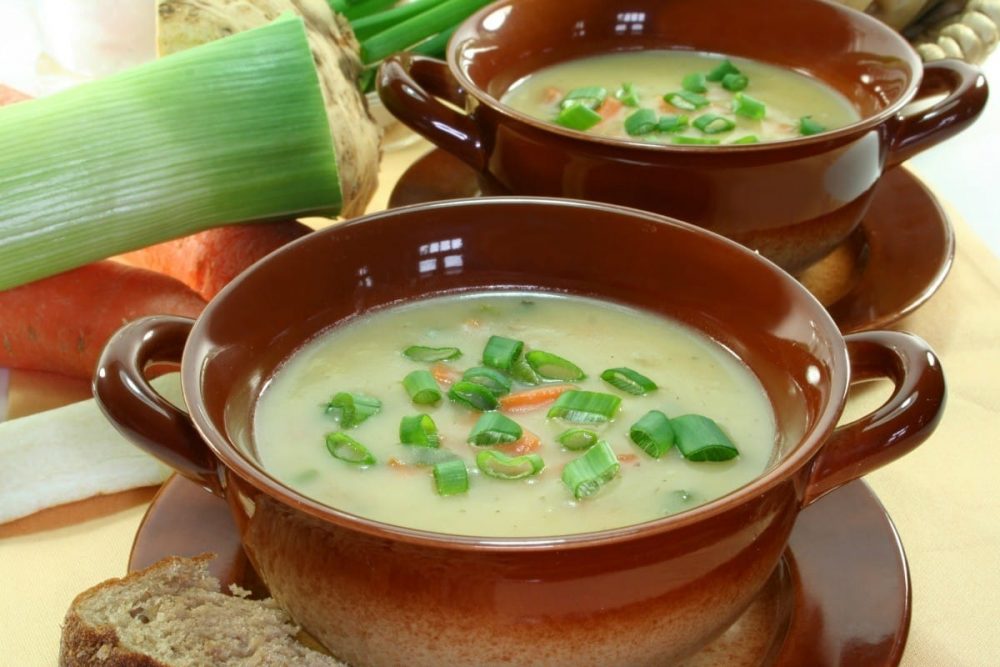 How to freeze potato soup

The best way to freeze your potato soup is to make sure that you are freezing cooked soup to begin with. The reason for this is that raw potato tends to lose its color when it is frozen, as well as its texture. This is not ideal for when you come to use the potatoes in your soup.

There are a few routes you can take when you want to freeze potato soup:

Part cook your soup: if you know that you are going to be freezing your soup, you can cook it about ¾ of the way to finished. This way some of the potatoes are less likely to be fully cooked. When you take the soup out of the freezer to heat it up after it has thawed, the potatoes won’t crumble as they would if they had been fully cooked. (Remember that if there are meats in your soup, you should take extra caution).

Blend your soup: if you blend all of your ingredients together to make a soup with a creamier consistency, you won’t have potato chunks that are likely to fall apart when thawed. This is obviously a personal preference case though.

In both of these cases, you will want to refrigerate the soup before you put it into the freezer. The reason for this is that bacteria can grow on food rather quickly if it is left to sit out. You do not then want to put room temperature food into the freezer and risk including all of that bacteria.

Here is the process of freezing potato soup (whichever way you choose to):

Some extra tips include labelling your soup with the type as well as the portion size, you will be grateful of this later! Another tip is to use freezer bags instead of containers. Although containers are fine, a freezer bag allows you expel as much excess air as possible before freezing.

How to defrost potato soup

In both cases, it is advised to plan ahead and take your soup out of the freezer the night before you want to eat it. Place the container or bag full of a portion of soup in the refrigerator to thaw out overnight or for around eight hours. An alternative to this is placing the container or freezer bag of soup in some warm water (make sure that the container is still sealed). This option will speed up the thawing process.

Another option is reheating it fully in the microwave. This will potentially give you the least appetizing option, but it is still an option if you are in a rush. Remember that any chunky soup that is put into the microwave from frozen will end up going mushy. This is because the water molecules that were frozen in the cooked potato will have expanded when heated up and caused the potato chunk to fall apart. This is why a blended creamier soup is sometimes a better option.

There are no real hidden things to look out for when you are freezing potato soup. As long as you understand the simple science behind freezing food you should be aware that freezing a fully cooked potato will result in it becoming mushy when it is thawed out. This is due to the water molecules in the cooked potato expanding and causing the potato to fall apart.

Another thing to consider is that blending your potato soup instead of opting for a chunky soup will potentially lead to a better defrosting experience. The only thing to be aware of then is that the cream could freeze in a strange way.

In order to avoid this, you can choose to cook the soup about ¾ of the way through and then freeze it. Then you can thaw it out and continue to cook on the hob, leading to a soup that is not overheated and is more even in texture. This is also a better option for meal prepping and freezing, since a partly cooked vegetable will tend to thaw out better than a fully cooked one.