Not everybody wants to eat all of their sour cream on the day that they make it.

For some, having the ability to freeze it means that it can be used for future meals, which is pretty handy for meal prep.

Can You Freeze Sour Cream?

Thankfully, the short answer to the question ‘Can you freeze sour cream’ is a resounding yes, so long as all of the right steps are taken to freeze and thaw it correctly.

It’s also incredibly simple to freeze sour cream, so long as you know what you’re doing. It can also save you a lot of money that would otherwise be spent on buying fresh sour cream from your local grocery store.

Here’s how to Freeze and defrost sour cream, in addition to some extra things that you should keep in mind before putting your sour cream in the freezer.

How To Freeze Sour Cream

The way that you freeze your sour cream is largely going to depend on how it has been stored before it’s frozen.

For starters, if you plan on freezing the sour cream in the container that it originally arrived in and it hasn’t been opened yet, then all you need to do is pop it in the freezer.

If you are going to freeze sour cream that’s been opened already or you’re trying to change the container, then you should first stir the cream to ensure that the mixture is still even, to give you the best taste and texture after the fluid has been frozen. 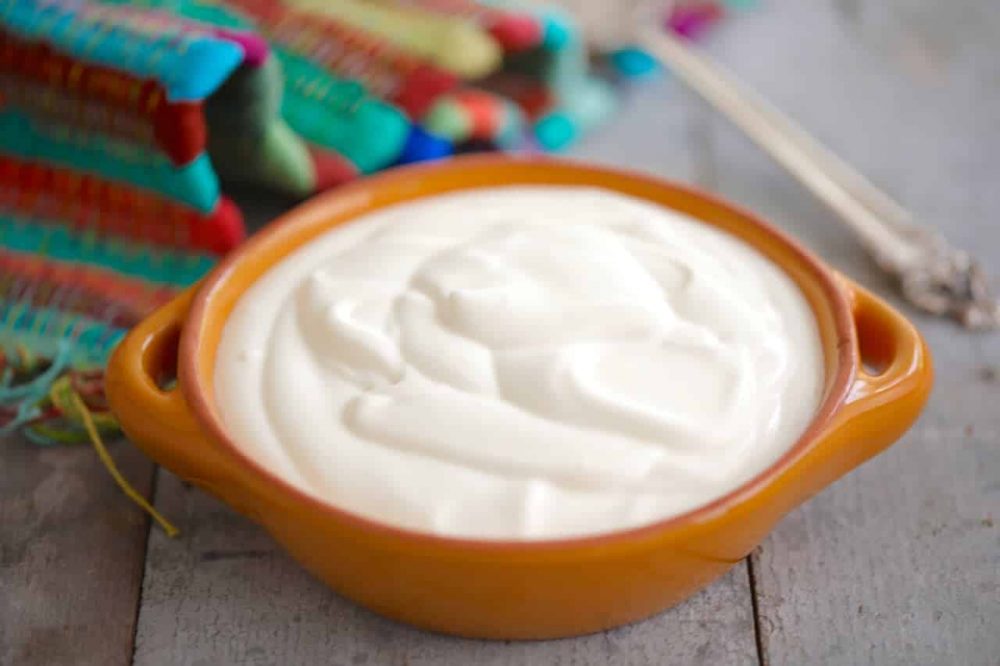 It’s worth stirring it with a whisk if you can. From there, you can just put it in the freezer.

If you find that you don’t have a lot of sour cream remaining in the initial container you used, then you should transfer the remaining sour cream to a new container. This is because an excessive amount of extra space for air can change the quality of the sour cream.

You can also store the sour cream in a freezer bag if you wish, but you should ensure that you squeeze any excessive air out of the bag before you put it in the freezer.

Before you store it, grab a pen and write down the date that you froze the sour cream on the container for future reference. It is possible to store sour cream for up to six months maximum, but ideally you should use it as soon as you are able to.

This is because sour cream will gradually get worse through time, even if you freeze it. It’s also better to store the sour cream in little portions.

This makes it a lot easier to serve it and put it into dishes, rather than trying to dig your way through a heap of frozen sour cream.

How To Defrost Sour Cream

There’s nothing particularly strenuous involved with thawing sour cream. Simply put the sour cream in your refrigerator and allow it to gradually defrost through the night.

It’s also possible just to thaw the sour cream by sitting it out on your kitchen counters, but this is not ideal. While it will thaw slightly faster with this method, it can also be more susceptible to growing harmful bacteria due to the higher temperatures.

You will notice that the mixture separates a little bit after it’s defrosted, but this is a completely natural occurrence that you don’t need to worry about.

Once the sour cream has thawed, it’s very important that you don’t put it back in the freezer as bacteria is likely to grow, making it unsafe to eat.

If you want to thaw the sour cream especially quickly if you’re making a quick meal, then you can do so by putting it in the microwave. It’s important to put it in the microwave for the right amount of time however. 30 seconds will be sufficient - much longer than this and your sour cream can end up a horrible, runny mess.

If you’re going to add it to another dish such as a soup, then it’s possible to put the sour cream right into the pot while frozen, as it will thaw out as the whole dish cooks.

Before using the cream, you should also check that it’s all good to eat. You should smell it before you eat it - if the odor is particularly strong or unpleasant then you shouldn’t use it.

If it smells okay, test taste it. If it’s all good after the taste test, then you can use it for whatever dish you wish!

Factors to Consider Before Freezing

There are a few things to think about before you try to freeze sour cream. The first thing to remember is that the texture of sour cream after it’s been frozen won’t be the same as the sour cream before you’ve frozen it. It will taste the same, but it’s still edible.

Putting it over your dips may not be the best choice as far as edibility is concerned, but it means that you can still use it on other things like casseroles and soups. You may find it somewhat difficult to spread sour cream that has been frozen as a result of the change in consistency.

It’s also important to remember that once sour cream has thawed, it will begin to separate. It will look something like cottage cheese after it’s thawed, but this is a completely normal occurrence.

If you find that your sour cream is a little too runny, then you can grab a strainer to get rid of any water that isn’t wanted. Then you will need to mix the cream remaining with some flour, then stir it to create a thicker consistency.

In short, freezing your sour cream it most certainly an option!

By freezing your sour cream, you’ll have plenty to go for great dishes for many months, with no extra monetary expense required. Just thaw out your sour cream and you’re good to go!