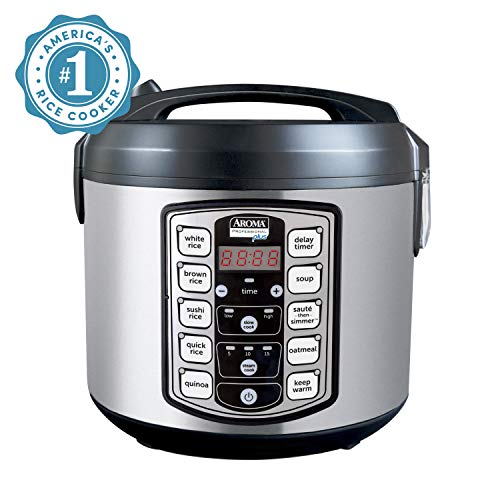 From the unit’s multi-menu, you get to switch between various types of rice with sushi being ion that list. It’s no surprise that this unit is a best seller considering that it’s multipurpose. We’re living in a minimalistic age where having many kitchen appliances is frowned upon as they take up space. This isn’t just a rice cooker, the unit is great at making soups, stews and even desserts. In fact, I have seen quite a few creative recipes on Pinterest requiring you to have this exact rice cooker.

Does it make sense getting a separate egg cooker while you could just steam them for around ten minutes with this unit? I doubt. Making hard-boiled eggs is enjoyable and surprisingly easy with this aroma sushi rice cooker. With its variable heat setting, you could switch this rice cooker to a low heat effectively turning it into a 3-quart slow cooker. Now that you found a rice cooker that could slow cook too, is there anything else you could ask for?

Set the rice cooker from 2 to 10 hours slow cooking and you will have perfect, fluffy rice (or sushi) waiting for you when you get home. This will come in handy when you’re tired from a day of being productive and all you want is to relax. The rice cooker automatically switches to keep warm mode at the end of the cooking cycle so you won’t have to worry about overcooking or the food getting cold.

Aroma rice cookers are particularly practical and this model takes the crown. With it, you will make restaurant-quality sushi every single time – without the constant stirring (and the guesswork) of course. Making fluffy brown rice is easy too. Switch to brown rice from the menu and that’s it.

Of course, all this efficiency comes at a price. If you particularly love to eat out, then the rice cooker will help you save as you will be getting (almost) similar quality rice. There are a handful of cooking presets to choose from and I’m quite certain that you will find one that’s efficient for you. The company offers limited warranty on all their products – where they only cover manufacturer defects and craftmanship. Either way, I doubt if a huge brand like Aroma would risk ruining their reputation by making low-quality products. 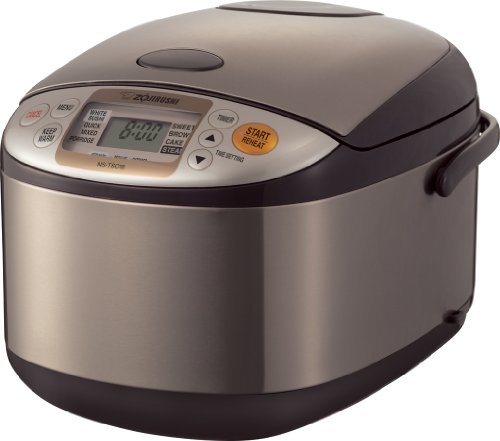 With a steaming basket, this unit is both a vegetable steamer and a rice cooker. Of course, the extra functionality doesn’t impair its sushi-making capabilities – which is why you’re getting a rice cooker in the first place.

This 10-cup rice cooker (uncooked) is quite a workhorse and it will make enough sushi for even large families. This isn’t an impossible feat for the unit to achieve considering that it has an 850 watts induction heater. Sadly, the rice cooker is quite bulky (and large) and won’t fit in most cupboards. Chances are, the cooktop will be its permanent home. The inner pot has a Teflon layer that makes it nonstick. This layer is quite durable and will possibly outlive its usefulness. As long as you don’t use metallic utensils – but you already knew that.

You get to choose the cooking end signal from a few melodies. I wonder why microwaves don’t come with this feature.

The sushi function of this unit is quite practical. Sushi rice is processed at the end of the cooking cycle when it’s a little firmer. The inner pot has sushi graduation marks as you will use less water. Of course, you will still have to handwash the rice. I know it’s still a pain in the neck but the rice cooker does the heavy lifting while you get to do the easy parts (like handwashing). The built-in battery auto-recharges making the unit somewhat portable. The company claims that the rice cooker could stay at the “warming” setting for a few days but I wonder why anyone would try this. 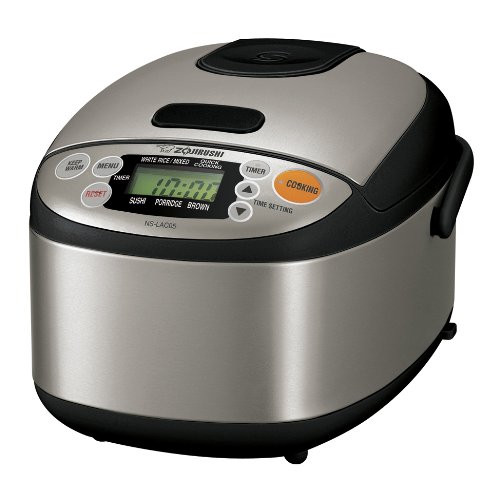 It’s no surprise that another rice cooker from Zojirushi has made it to the top of my list as the company is an industry leader. This compact sushi rice cooker is equipped with all the functionalities you could ask for – and without compromising on the size. It was designed with small families in mind or for dorm dwellers where kitchen space is a luxury.

Making the most of fuzzy logic – the artificial intelligence chip used in rice cookers – this 3-cup unit automatically adjusts the cooking conditions based on the amount and type of rice you’re making. It will make perfect sushi every single time. Of course, different types of rice have different cooking conditions with a few overlaps here and there. In this unit, sushi and white/mixed rice are both cooked for 40 minutes but under different conditions.

It features an experimental quick setting where you could make white rice in under 20 minutes. Of course, the end results are somewhat varied and the rice may be too hard at the end of the cooking cycle depending on the brand you’re working with.

Brown rice – the one that still has a brown unprocessed cover – needs to be preheated before cooking. The rice cooker first preheats it ensuring that the bran (brown cover) absorbs water before cooking it. As you may be guessing, this process takes time and your meal won’t be ready before the one-hour mark.